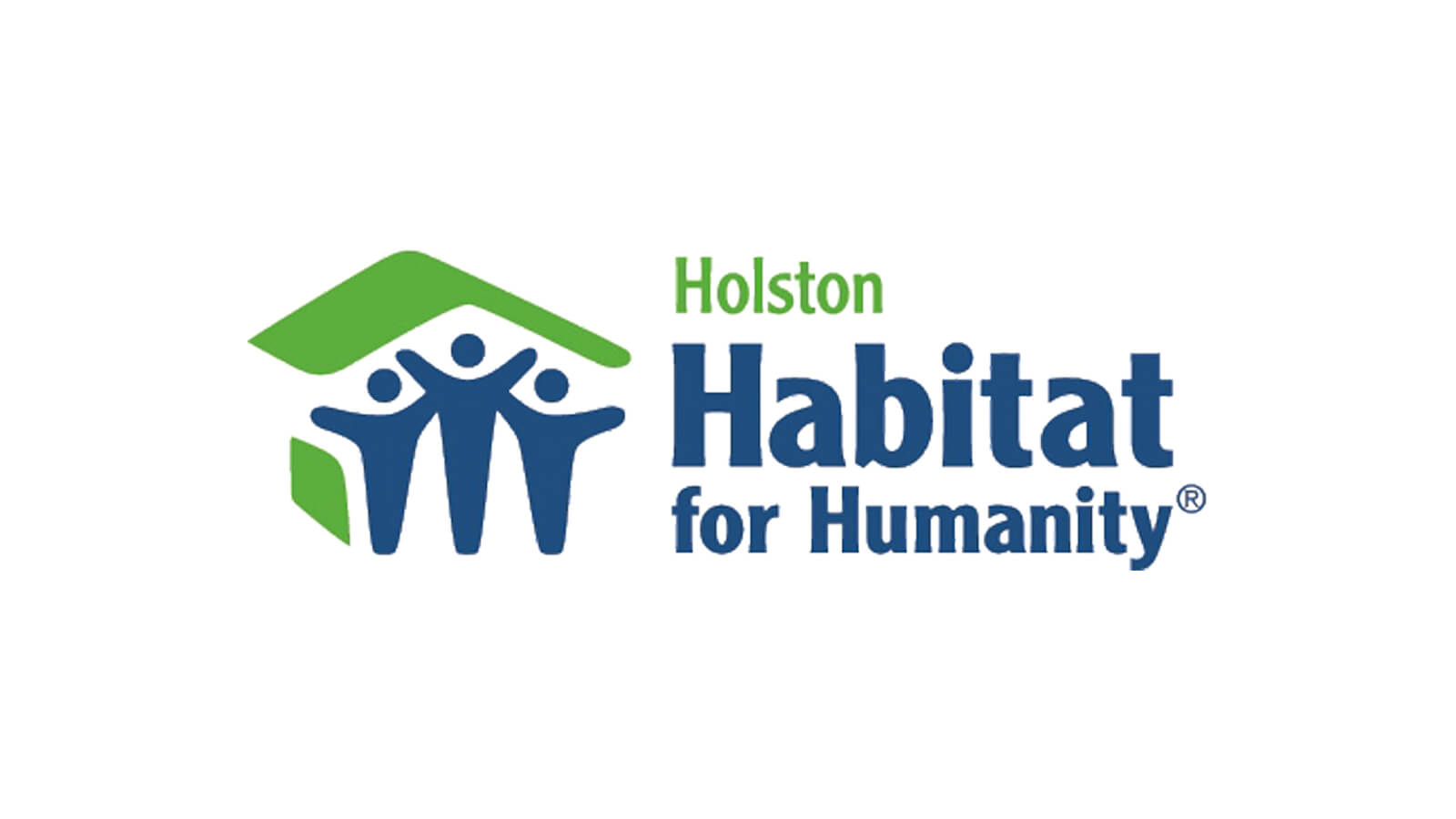 Streamlining the Volunteer Database at Holston Habitat for Humanity

For the Holston Habitat for Humanity chapter in Kingsport, TN, the problem seemed to be that with all of the volunteers that were giving of their valuable time to the organization, there seemed to be no way to keep track of them all, nor was there a way to record the hours that they put in each day, week and month of the year. “There was not really a way to track volunteers and their information,” says Mandy Penz, Volunteer Manager for the chapter. “We used Customer Manager. I used that for labels. You could do some filtering of donors and volunteers, but that was basically all you could do. So we weren’t really tracking our volunteers or keeping up with them or doing retention with them.” Essentially, Holston had a volunteer management system/volunteer database that did not help it do what it needed to do .

There’s a lot that goes into making sure that the volunteer management system you are using is living up to what it is billed to do. Any volunteer management system worth its weight should be able to help a nonprofit organization keep track of its volunteers and their volunteer hours, should be able to help in scheduling volunteer shifts and create volunteer jobs and assignments, recruit new volunteers, and simplify the volunteer application process for anyone that is a prospective volunteer, among other activities. What Penz and the Holston Habitat for Humanity chapter found was that the software system they were using was lacking and did not have all of the features that it needed to perform its duties. “We used a software called Customer Manager, which was basically just a glorified Excel spreadsheet,” she admits without hesitation.

Soon enough, the organization was on the hunt for a new software system that served as the whole package in terms of volunteer management, but could also do more. “I wasn’t involved in the whole switch to begin with. Our CEO spoke with somebody at a conference that he went to. After some deliberation, we eventually decided that it seemed like it did everything that we wanted it to do. Having a non-existent software to do those things for, we were very happy to finally have something that would do what we needed it to do. I think the first thing that we did was the fundraising campaign for our co-founder Jo Morrison. That’s how we kicked it off just to test it and see, and we absolutely fell in love with it.”

Penz and Holston Habitat for Humanity found that so many parts of the volunteer database, and their efforts as a whole, became much easier. “We were able to make volunteer campaigns and get volunteers to sign up online. Before they would sign a paper waiver and I would have to come back here and put in all of the information myself, which took forever. So it was definitely nice to put that in their hands and let them do the work.” The convenience of having several types of software systems in an all-in-one system that are connected and integrated with the volunteer management system is what ultimately made Penz a believer, because it was truly in line with what the chapter needed at the time. Before, there was no way to grab hold of any kind of information about volunteers. With the introduction of Giveffect, Penz’s job as the volunteer manager was made that much easier, due in no small part to Smart Automation.

And there is evidence that the switch over from multiple systems to a volunteer management system/volunteer database that is also an email marketing & direct mail system, a website and web hosting system, a fundraising and events system, a wealth screening & major gifts system and more have been beneficial. For example, the chapter was able to create a campaign called Jessica’s Build where people are able to sign up to volunteer, donate and create a team, all within the same campaign event page. 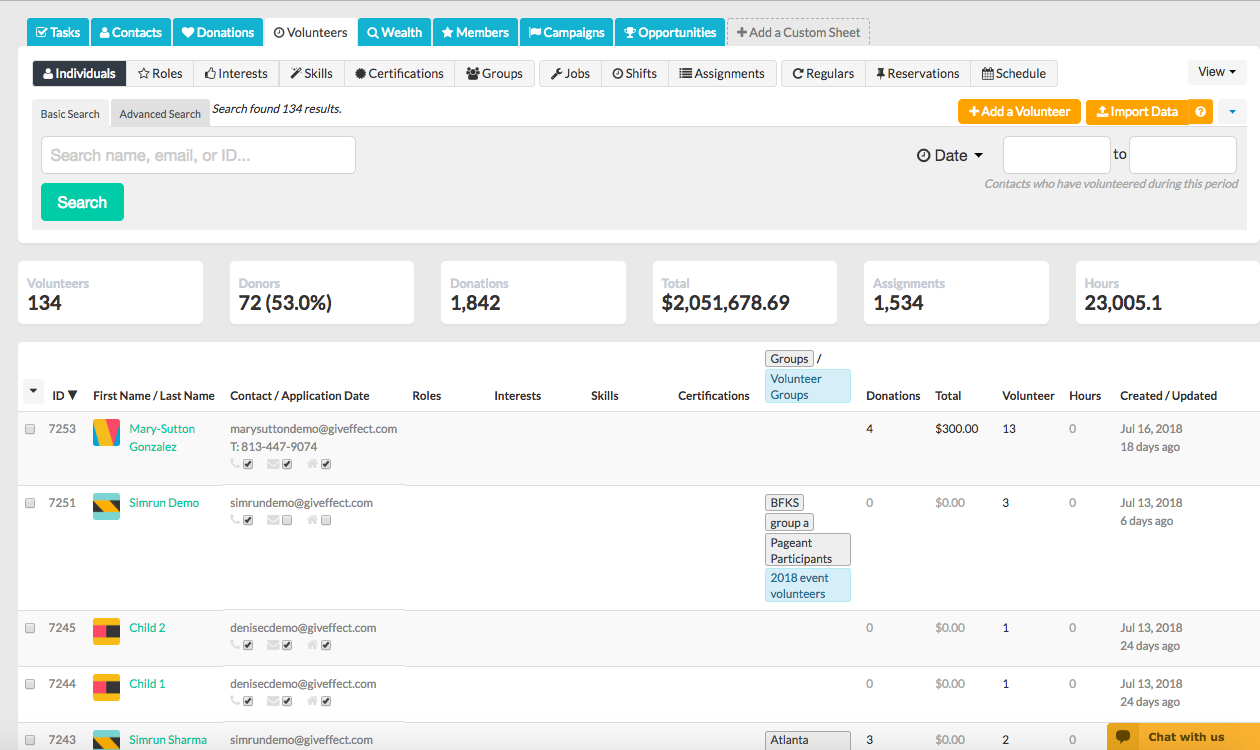 And with the Smart Automation feature, which connects the volunteer database to the other nine systems found within Giveffect, everything that happens on this campaign page, from people signing up to become volunteers to donations flowing in to people creating teams to fundraise, is automatically updated in the back end of the Giveffect system. So, for Penz and the rest of the staff at Holston Habitat for Humanity, the time spent on manual data entry and the administrative work is cut substantially. 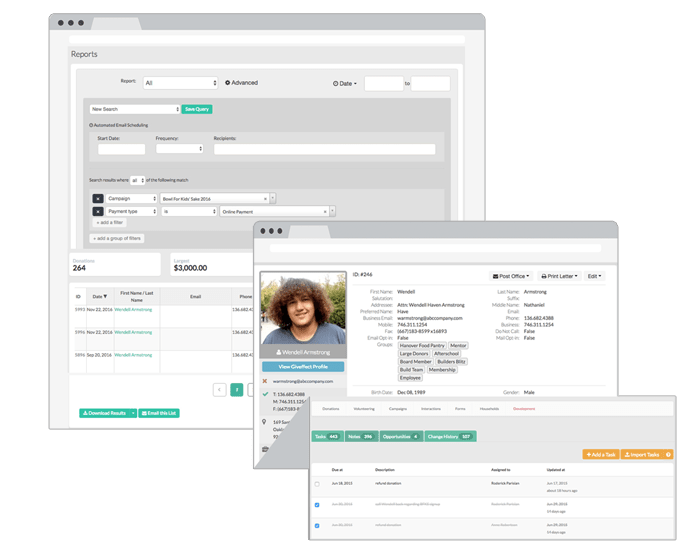 Hoston Habitat for Humanity also now has the opportunity to create and distribute reports on their volunteers with the Giveffect volunteer database, something else that they did not have access to previously. Not only did they have no way to track their volunteers, their jobs, and their hours, they also could not give information to board members and other stakeholders about things such as volunteer growth and retention over the course of a certain period of time. Now, they have the opportunity to do that and more by either creating custom reports based on volunteer information, or using canned reports. 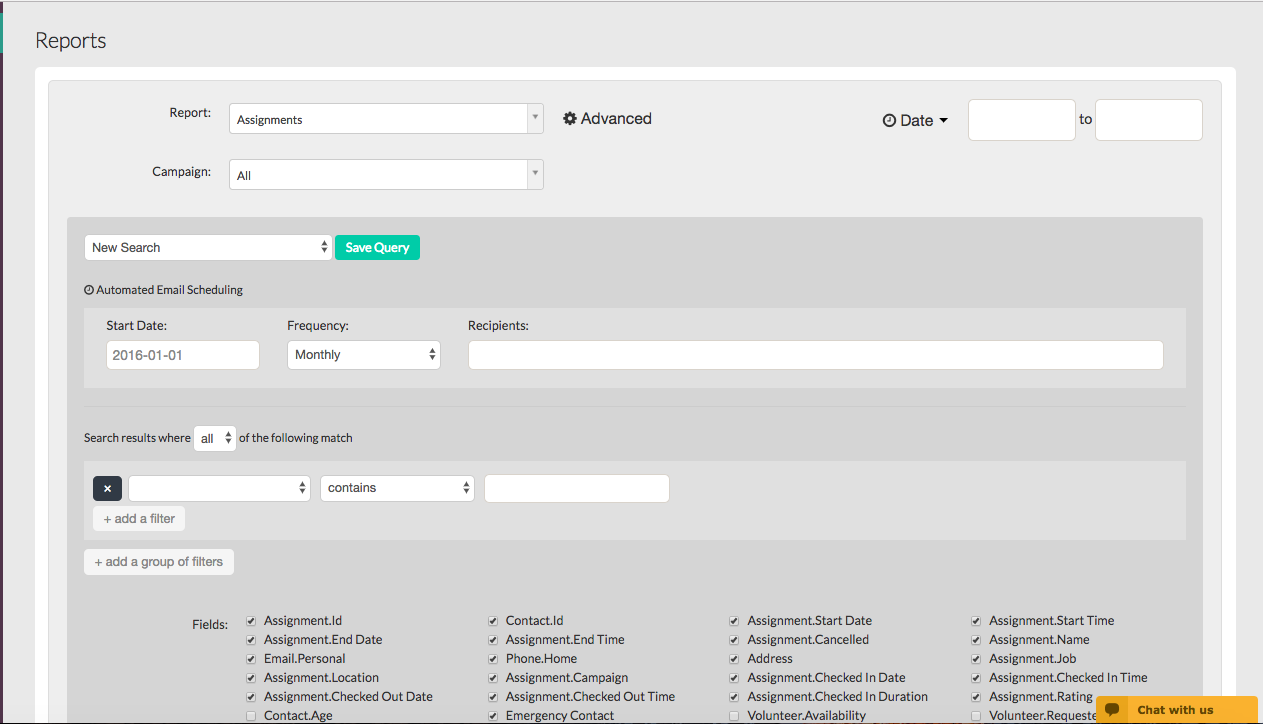 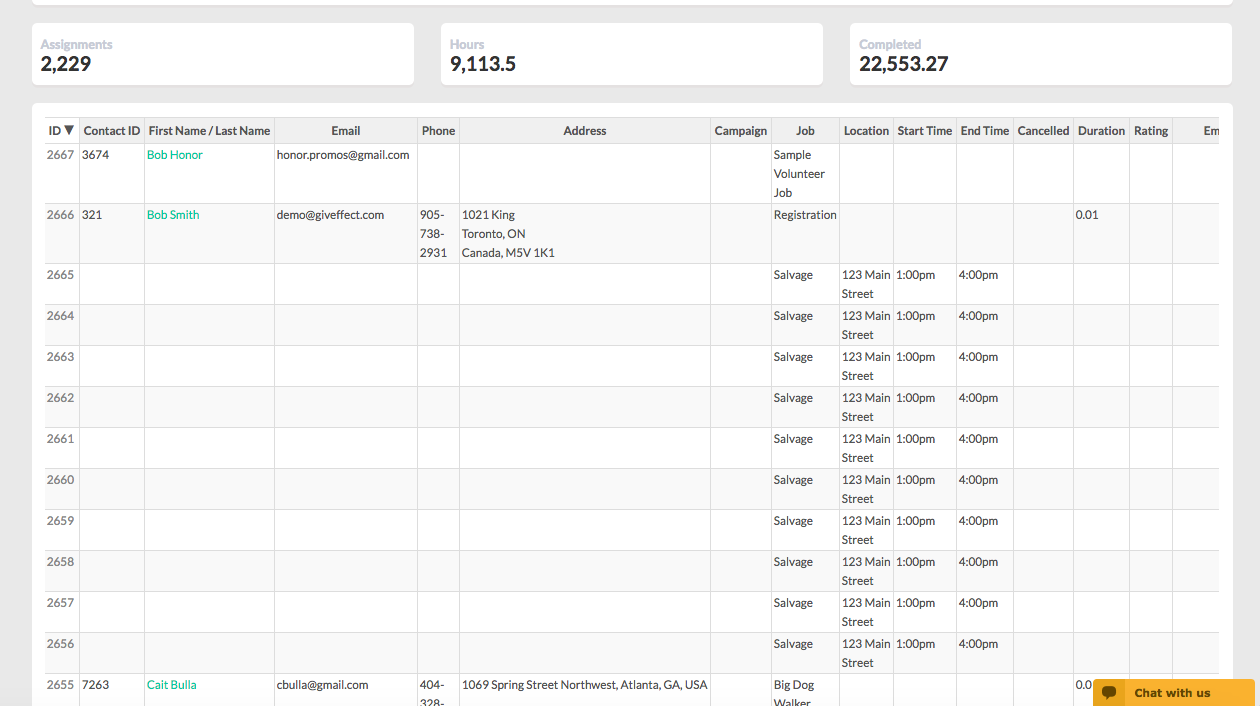 Overall, Holston Habitat for Humanity has gone from a nonprofit organization chapter that had no way of tracking its volunteers through a software system, to a software system with a volunteer database that is using any and all tools that have been made available through the Giveffect’s all-in-one, integrated and automated system. They serve as a true model of what Giveffect is all about: creating integrated, all-in-one software solutions for nonprofit organizations so that they do not have to focus on fulfilling their mission and vision. We commend Holston Habitat for Humanity for being a leader in this space.

Want to learn more about how Giveffect can help your nonprofit in your volunteer management efforts? Schedule a demo with us today by visiting us online at giveffect.com.

Pulling Reports and Queries in Giveffect: Faster is Better 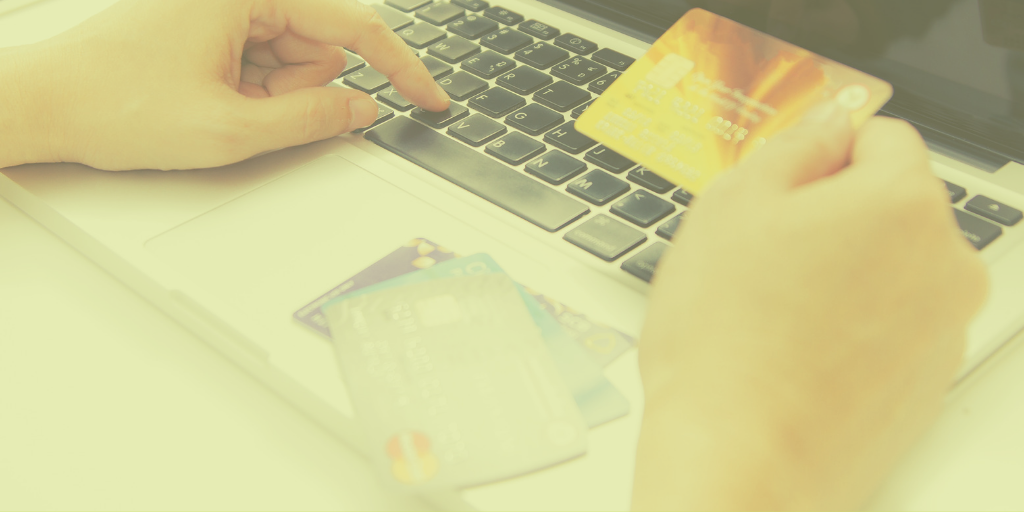 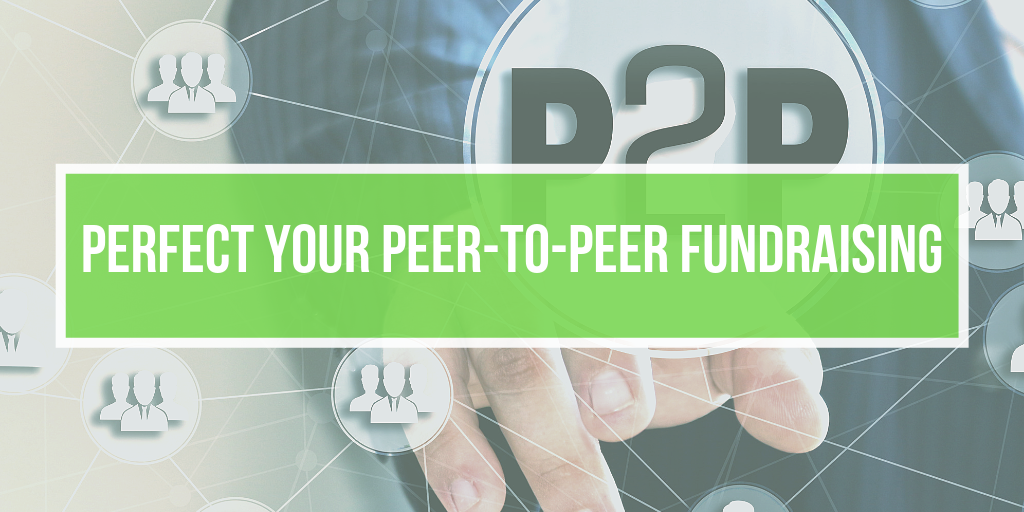 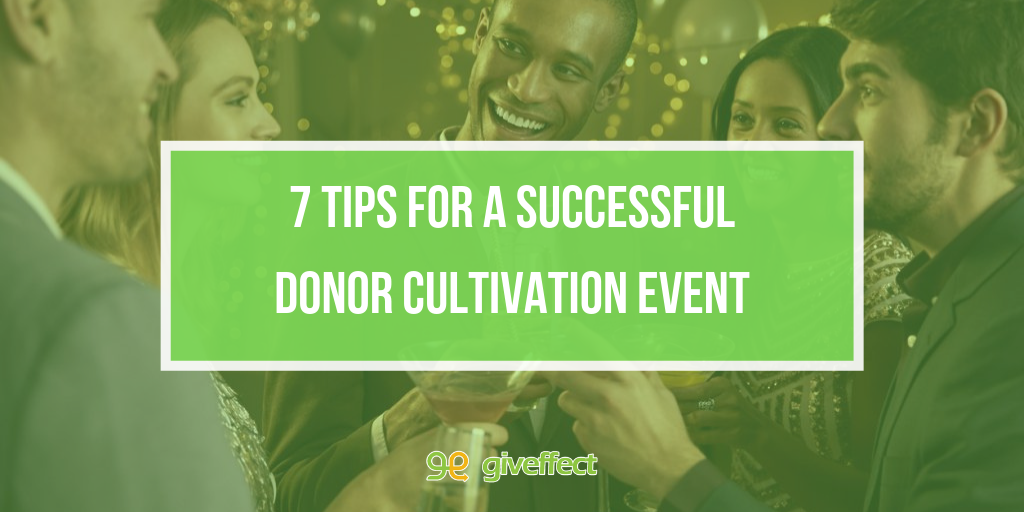 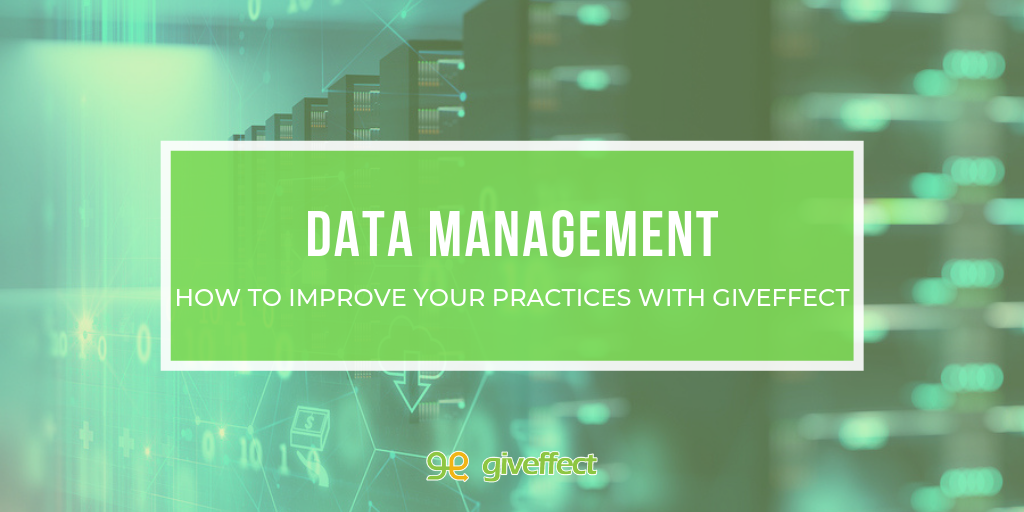